A couple of weeks ago I enjoyed an excellent weeks' holiday in and around the Lizard peninsula in Cornwall with my partner. Although I'd been to Cornwall several times before, I'd never visited this most southerly point, and it was somewhere I had wanted to go for a long time due to the very enticing wildlife and geology! We visited various areas and mainly did a lot of walking and eating; I'm going to write a few blog posts about some of the highlights.

On our first day, very strong easterly winds were forecast throughout the day with cloud clearing later on. Undeterred we set out from our cottage at Trewillis Farm near Coverack, our closest village and a lovely place that I liked very much. Walking through the fields towards Coverack I spotted Fumitory growing around some field margins:

Off Coverack the wind was whipping the sea up into some sizeable waves! Coverack village and the harbour area in particular were very picturesque. On the beach a small flock of Turnstones were scrambling around, but for much of our walk the high winds meant that many birds were keeping a low profile, and we didn't see as much as on subsequent walks. I later discovered after buying a geology booklet that the Moho can be seen on Coverack beach! Had I known this while we were there and the tide was out, I would have investigated....it would have made us late for lunch though so maybe for the best that I didn't. I wasn't too disappointed as I had more geology treats lined up for later anyway!

After Coverack we followed the South West Coast Path north. We'd been slightly concerned we might be walking along exposed clifftops in the high winds, however a good proportion of the path proved to be through scrub and young woodland so was relatively sheltered, and the more exposed parts were fairly low-lying too. We saw a good-sized flock of Linnets and there were loads of lovely maritime plants around.


Once we reached the abandoned Dean Quarry, we turned inland but not before we'd investigated the quarry and I'd collected a couple of specimens for my rock collection! The rock quarried here was gabbro, a coarse crystalline intrusive igneous rock that formed deep within the Earth's crust when magma cooled and solidified slowly.

Our lunchtime destination was Roskilly's open organic farm, where the most delicious ice cream in Cornwall is made! We first had our lunch (massive crab sandwiches for me, yum) before having a look around the farm; it has a very pleasant landscaped area of ponds and woodland to walk around and among other birds we saw Long-tailed Tit, Buzzard, Song Thrush, Chiffchaff, Grey Heron and a female Mallard with 11 ducklings.

Back in the restaurant it was ice cream time, from the many exciting flavours on offer I chose one scoop of gooseberry yogurt and one of wild cherry & chocolate - delicious! We left Roskilly's and walked back towards Coverack inland, forming a pleasing circular route. We were a bit early for dinner (we'd booked a table at a restaurant in Coverack) so had a cup of tea in the local shop and wandered back through the village and down the coast path in the opposite direction. High tide was approaching and although the clouds had finally cleared, the wind was as strong as ever and the resultant waves were battering Coverack! The walk along the sea front carried with it the high probability of a soaking :oD


We enjoyed a superb dinner at Harbour Lights restaurant (bouillabaisse for me, perhaps you can see a seafood theme emerging) before heading home to our cosy cottage for the evening. Here's a map with our route more or less shown in purple.....what a great walk for our first day on the Lizard peninsula :o) 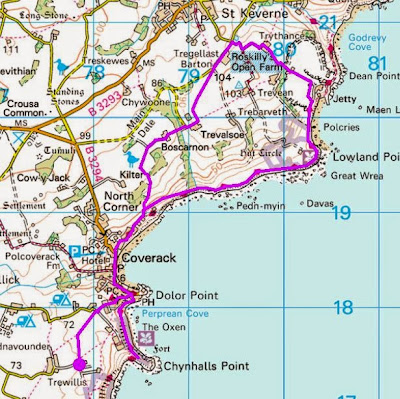